Some of the best Rugby Guinness World Records

If you love all things rugby, then you’ll love these Guinness World Record rugby facts:

The fastest pass ever in a game of rugby was by Joe Simpson of Wasps. It’s no wonder he has the nickname ‘The Speedster’. He can complete a pretty speedy and accurate pass at no less than 48 mph!

Rugby Union’s oldest competition is the United Hospitals Cup which was first played in 1875. It took place between representing teams of different hospitals across England.

This game is referred to as the greatest game ever played in the sport. Stadium Australia in Sydney was packed out with 109,874 spectators who came to watch the Aussies play New Zealand. Sadly for the home crowd, Australia lost by 39-35 in the record-breaking match of July 2000.

The longest game of continuously played rugby union was 28 hours and 23 minutes. It was the result of a charity event, raising funds for local charities in Sunbury-on-Thames. The School of Hard Knocks won 1849 to 1480 against Scotty’s Little Soldiers. The event was held between 15th and 16th August 2015.

The biggest rugby ball in the world is 15 feet and 5.39 inches long and 9 feet 8.14 inches wide. It was made by Cathay Pacific for a rugby sevens competition in Hong Kong in 2011. It has a circumference of 39 feet and 7 inches, about 20 times bigger than a normal rugby ball.

1,758 people were involved in the world’s largest rugby scrum in June 2017. The achievement was part of the Palmerston North Winter Festival at the high school of the same name in Manawatu, New Zealand.

The longest successful recorded drop kick is 77.7m. It happened in a game of South Africa versus England at Twickenham in January 1932. The player behind the awesome kick was Gerald Hamilton. 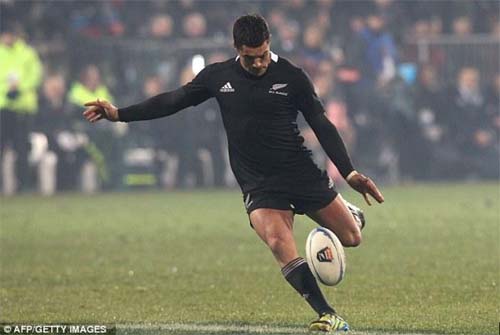 Most siblings in one rugby union international

This is a fantastic record and one that’s unlikely to be repeated. The most siblings in the same match is 5! Max, George, Frank, Archie and Jack Skofic all appeared together for Slovenia in April 2014 in an international against Bulgaria in the European Nations Cup Division 2. Frank, George and Archie played the full match, while Max came on after 25 minutes and scored 3 tries. Jack came on at 77 minutes, so all brothers were on the pitch for the win over Bulgaria 43-17.