Animals loved by the Ancient Romans

We are a world of animal lovers and non-so more than the domesticated dog. We spend time, money and affection on our dogs with many people buying bespoke dog houses for their gardens and Designer Dog Collars. But animals have been loved by nations for thousands and thousands of years. The Ancient Romans are one such example.

Here are some of the pets and service animals that the ancient Romans would have kept. 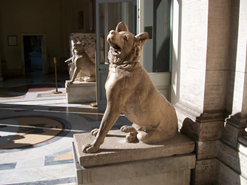 Dogs – dogs were kept both as pets for companionship and also as guard dogs. They were also used by farmers as hunting and herd dogs much like we use beagles for hunting today. Mosaics have been found depicting dogs, which identifies how important these animals were to them as usually only the most revered individuals found their way onto mosaics.

Birds – these were the most popular type of pet to be kept in Ancient Roman. There are a number of birds that are talked about in text and poetry from the time and art work also shows these delightful creatures.

Pets were so loved in Ancient Roman that upon an individual’s death some of them were sacrificed so that they could be with their owner still in the afterlife.