The tale of Enda of Aran.

The isle of Aran in Ireland is famous for many things, not least their forever in fashion Aran Sweaters, like the ones from https://www.shamrockgift.com/aran-sweaters, but the tale of Enda of Aran is another. This is the story of a warrior king that came to the island and formed a monastery. 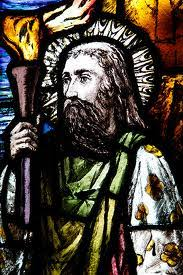 Enda was a Prince in the county of Ulster in the North of Ireland. He became King and set about on a trial of conquest defeating his enemies whenever he came upon them. However, it was after a meeting with his sister, the Abbess Fanchea, that his life would change. Fanchea attempted to dissuade her brother from a life of blood and conquest. Enda said that he would but only if he could take a young girl from the convent to be his bride. Fanchea agreed but the girl died before the wedding. Fanchea takes Enda to the girl and convinces him of the frailty and importance of life. Enda is converted and turns away from war.

Enda becomes a monk and when he is gifted the isle of Aran by his brother in law Aengus King of Munster ,he sets out to build a Monastery that he and his fellow monks can use to devote their lives to their faith in quiet contemplation.